VHF Radios with DSC …. Connections make all the difference

Recently, I upgraded my VHF Radio Operators Certificate to include the endorsement for DSC (Digital Selective Calling)

Digital Selective Calling and DSC VHF radios have been around for a while now but there seems to be some information out there that is vague,  incomplete or in general is misunderstood by the average boater.

While taking the course I found  more than a few things and details that I didn’t know about DSC.

This might be obvious, “old news” and straight forward to some of you, but in an attempt to share the information I thought it was worth blogging about.

First, here’s a short video on DSC and how it actually works.

You can tell if you have an up to date DSC radio by the little door that flips up or opens and it has a “distress” button under it.

Now here’s where it gets interesting………………..or at least where you need to take it 2 steps further…

It’s Important to understand that just connecting the power, ground and antenna for your new DSC radio does not mean that the “Distress” function (under the red door) will dispatch the Coast Guard to help you.

There’s more to it than that! You need to take a few more steps to make it all work for you.

Before that  shiny new DSC Radio will work you must obtain and enter a  Maritime Mobile Service Identity (MMSI) number in  for it to properly function and activate the DSC side of the radio.

Unless you have entered your MMSI number, the radio will very likely not actually send a digital message at all!……… In fact if your new VHF does not have a built in GPS function or has not been connected to your chartplotter, you will need to manually enter your GPS co-ordinates into your radio BEFORE it will successfully send a digital distress call.
That would take quite a while to enter all those numbers. Time you might not want to waste in the event of a DISTRESS.

So…… in addition to the MMSI number it is well worth it to connect your new VHF to your chartplotter.
Usually this connection is via the 0183 or NMEA 2000 network. 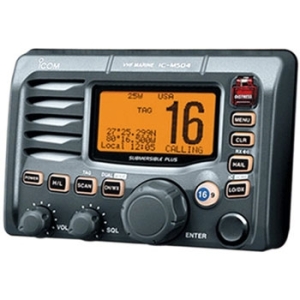 In the picture above notice the left bottom corner of the screen shows the “lat and long” and time. This information is taken from your chartplotter and seeing it on your radio screen, you know it’s connected .
Its an easy connection just 2 wires in most cases!

Below is a typical RADIO to VHF connection but you should consult your manual for full details.

These are 2 important steps (along with wiring the 12V DC  power and proper install of the antenna) to make sure your radio functions like you want it to in the event of an emergency and to be able to take advantage of the full DSC capabilities. Some newer radios will alert you (when you first power it up) that you need to input the MMSI number so that the Distress function will work but on some models this message is easily skipped and will not show up again.

A note on older radios….

Some older radios have a red “EMERGENCY” button (without the flip up door) but they may not be able to take full advantage of today’s DSC features including the primary reason you may want it….DISTRESS.
These older radios may lack the ability of sending the GPS co ordinates and your MMSI information, dramatically slowing down response time.

The new radios actually have 2 receivers. One that you select the channel or frequency and the other monitors the digital channel 70 ALL THE TIME.

Many new radios even incorporate their own GPS and AIS systems as well as  DSC. These will still need the MMSI number programmed into them but have additional features that make them even better.

Here is an example of a screen on a newer Standard Horizon model:

Below are 2 links to register and get your MMSI number :

Another important thing to remember is that IF YOU HAVE PURCHASED A Previously Owned BOAT that already had a DSC radio installed, you WILL want to double and triple check that it is wired in properly but more importantly, it will need to be reprogrammed for YOUR MMSI number.
If the radio still has the old owners MMSI programmed that’s not a good thing! You may be able to amend an MMSI number that belongs to you but you should check with who issued the number to make sure.

In some cases you may need to remove the radio and take it into a dealer to be reprogrammed or it may be easier to purchase an updated radio and start from scratch.

The same is true if you SOLD a boat and did not delete and cancel the MMSI number that was in the radio. You would want to make sure this was done as well.

The DSC system is fully operational in BC and WA State and all new VHF radios sold now should have the ability to utilize DSC. Essentially this DIGITAL communications system can not only aide in a distress situation but will also act as another way to “hail” another vessel or a group of vessels and have many other additional features like position polling and group calling, all done digitally on Channel 70.
While the “DISTRESS” function of DSC seems to be the most important, the “Individual Call” feature is designed to free up the “calling chatter” on channel 16 ….in the future we all may need to use this feature
Here’s a video of how that works

Most people want the new radio for the security of that RED DISTRESS BUTTON. I have one of these newer radios. When I fist installed it I programmed my MMSI number into it and hooked it up to my chartplotter  but I will freely admit that until recently, I did not know exactly how to make Digital Distress Call or how to use some of the other features of the radio !

Short of taking the complete radio course,( which I do recommend), here’s a video from the UK that explains how to make a DSC Mayday / Distress call. It seems to be the same protical  here in North America 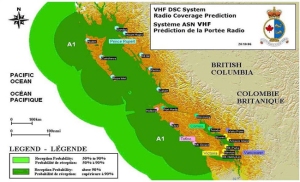 One last bit of useful information…. most of these new radios are reported to be power sensitive and apparently need good clean 12V power to function properly. The radio will appear to be working but both VHF and DSC transmission can be prevented by low power from a poor connection, low battery or simply power from another device drawing the load down. Worth checking how your radio’s 12V DC is wired.
If possible  wire it directly to a properly fused power point and not just “scotch locked” onto a random ignition or hot wire somewhere under the dash.

Your radio’s manual will have complete installation and complete operating instructions regarding both VHF and DSC features.

Hope this information was useful to somebody.

See you on the water!

1 Response to VHF Radios with DSC …. Connections make all the difference