When all PLATHS lead to a new Windlass

Recently we were gathered with friends planning our mid Summer Cruise. It became quite clear that this cruise would involve anchoring at a few more places than I had thought.

I happened to casually mention that our boat, (while having in the last year received a new anchor and  extra 50 feet of chain), did NOT have a WINDLASS. It never has had one.
“Oh My” was one reaction “hope your feeling strong” they said….. “your gonna wish you had one” they continued.
“We had a windlass on our 26 “, I said “and we never used it”…. AH came the reply …..“but you have at least 3 times the weight of gear now”…………. hmmmm good point!

Well, as you might suspect that got me thinking (maybe worrying) and after a few days I opened the file folder marked “Windlass” and started going through the stuff I had been collecting.

I went back and forth, choosing from styles, sizes, prices, brands, models and trying to get some recommendations that made sense.
One consideration was trying to keep a new windlass from looking too “new”. I wanted it to look like it had been there for 30 years. Perhaps a bit like restoring an old car, I wanted something close to what would have been an original Tolly option.

I kept coming back to the PLATH WINDLASS and really liked that look.

As near as I can tell, many Tolly’s had these as factory equipped options.

I spoke with a few people who had great things to say about the windlass and more important about the Plath Company and their customer service.

I talked Ron at Plath and after 5 minutes on the phone I had secured a totally rebuilt 9A Windlass….. 2 days later, as promised it arrived! 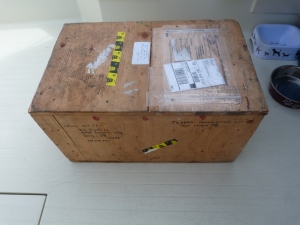 Now to start the installation.

As they say the first one is the hardest….from there it gets easier. This project took about 20 holes in the deck!

I located the windlass on the deck so that the wildcat and chain was lined up with the bow roller, then positioned it on the deck so the mounting hardware and power/ground wires would be all inside the chain locker.

With all that measured out came the drill and even the jig saw !

Drilling and Sawin’ Holes in the deck 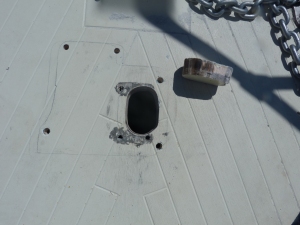 Note that the deck is over 1-1/2″ thick with solid reinforcing under the area that the windlass is mounted. 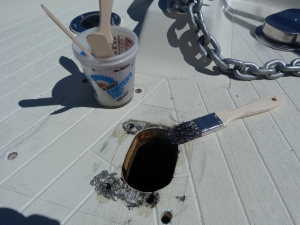 Glassing in the exposed core of the deck 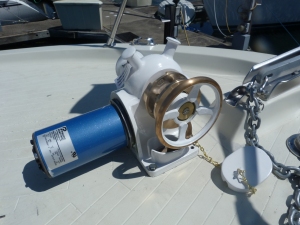 I sealed the windlass base down  with 4200 and bolted it down with new stainless button head cap screws, over sized fender washers and locknuts .

Edges masked to keep the 4200 away from the deck 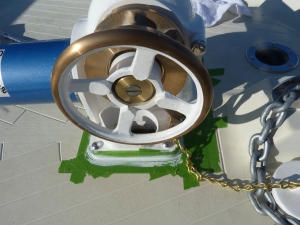 Once the electrical was wired and hooked up the final step was to install the motor cover. 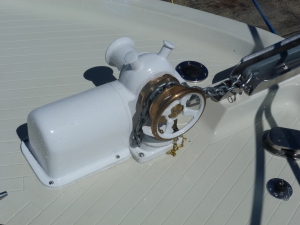 Motor cover sealed and screwed down

Now we are ready to go and anchor !
Another project complete.

This entry was posted in Boat Projects, Tollycraft 34 Projects. Bookmark the permalink.