I have always really liked the look of  Tolly’s with a Radar Mast.
The radar on Tolly Roger needed upgrading and I wanted to add a mast at the same time.
After sourcing only 2 companies that would still make one, the cost was just too high so the project went on the “back burner”.
Then, last July I found a used aluminum mast on Craigslist. Originally on a 36 Uniflite, the owner removed it as he had never installed a radar dome and did not want to tilt the mast as he docks in a covered slip. 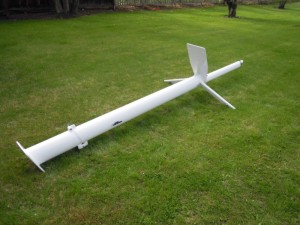 The used mast as purchased

The price was right even if it needed some modification and new powder coating.

The height to the radar plate was too high, so the base was cut down and re-welded.
The top of the mast was trimmed as well. I also trimmed the radar shelf to better fit the new Garmin system.
Then I sent the mast to the sandblaster, back to the welder to weld on a top plate and GPS antenna bases on the spreaders.
Last stop was at the powder coater. 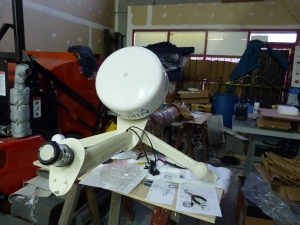 I pre-wired the mast in the shop for the GPS and AIS antennae, Radar Dome, new LED Anchor and the 2 Spreader lights.

The entire mast with the radar dome, lights and 2 antennae weighs 55lbs.

The mast ready to be raised

Here is the mast lying in the cockpit ready to be lifted and bolted to the base.

The base was pre mounted on the back of the flybridge deck. This was through bolted with a 3/8″ plate of aluminum under the 2″ coring. The goal here was NOT to drill through into the salon and have to disrupt the headliner. I also wanted to hide the wiring between the back deck and “porch” ceiling making it as clean as possible.

This required the ceiling of the overhang “porch” to be dropped. There is just enough room in between to hide the wiring, the backing plate and locknuts!

Next step was to guide the wiring through the base and install the upper mast.

The Mast in place

I added 1″ Stainless braces to protect from any side to side movement when underway.

Just need to finish the wiring and it will be ready to go ! 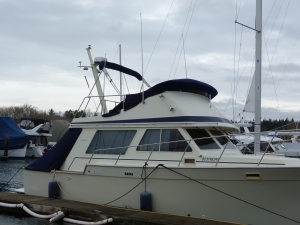 Here’s the top of the mast taken wile underway;

This entry was posted in Boat Projects, Tollycraft 34 Projects. Bookmark the permalink.