Like many older Tolly’s, Tolly Roger’s windows were in need of some TLC. They were not leaking (yet) but the felt tracks were badly worn out and in need of replacement. 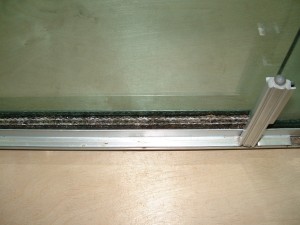 The windows came out easily and I was lucky that all the side walls of the boat were in excellent shape and no signs of any leaks or damage.

I removed the glass by prying the frames apart in the middle and they kind of pop out. I marked the frames where the felt tracks start and stop as well as the rubbers seals.

I removed the rubber seals and felt tracks. This makes a huge mess so do it outside! 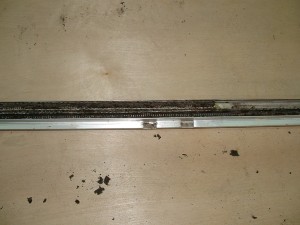 The frames were in good shape so I just cleaned them up with soap and a scotch pad. If (I were to do it again I probably would have them powder coated)

I ordered the felt track and rubber seals from BOUNTY MARINE

Installing the new felt tracks took a bit of practice. I punched drain holes about every 2″ where the tracks run along the bottom to allow for drainage. I used a small leather punch.

While there are many ways to “set” the tracks in place, I found that using a painters stir stick proved the best. It’s a bit of a slow process but it seemed to work the best.

The trick is to push down the new track until you feel it “set” in the frame. You don’t want it to bottom out in the frame but it must go far enough so the glass fits correctly. It helped that I marked the frames where the felt and rubber were in the frames.

Reinstall the glass and set the fixed portion firmly in place. It really helped to leave the rubber seals out in the warm sun. Much easier!

I did each window one at a time and by the end got the technique figured out. I did find that the sliders were very stiff so I pried the mohair track apart with a pair of pliers. This helped.
Now I just have to keep the drains in the window frames clear and these should be good for another 25 years!

This entry was posted in Tollycraft 26 Project archive. Bookmark the permalink.

5 Responses to Rebuilding the Windows